Influencer Marketing vs Other Form of Marketing 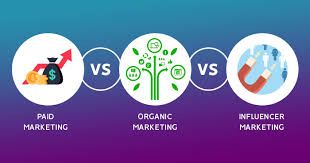 This is the most common question that would surface in contemplation of which marketing approach to adopt.

Before we get into details, We'd like to share some of the concerns that's been raised by brands when it comes to influencers marketing. "Creating ads is a more affordable alternative to reach out to targeted audience without overspending". There are several delivery optimisation, Cost per click(CPC), Cost per Mille(payments are made only after 1000 impressions), Cost per Acquisition (charges occur only when consumers purchase products or sign up for services).

We've also received a few feedbacks from different brands mentioning they have not paid for the services from influencers only sponsoring products and services to them in return for the advertisement on social media.  Now, Brands realise the effectiveness of influencers marketing but due to the constraints that they can’t execute both platforms due to the budget allocated, they are placed in the dilemma of choosing between the best channel.

We've identified a few reasons why brands chose to avert away from a marketing approach. Cost, which is their primarily concern if the services are too costly for their budget allocated. Results, Are the Return of Interest (ROI) presented reasonable for the cost incurred?

To cast light over this topic, We acknowledge the need for brands to rule out the inferior options so identifying the advantages and disadvantages of Influencers marketing and the other platforms is the best way to get across.